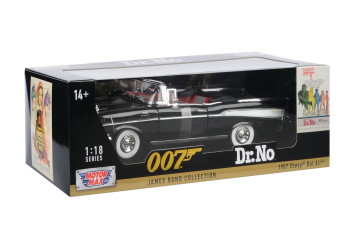 The James Bond Chevy Bel Air Model Car - Dr. No Edition - By Motormax is the car driven by Mr. Jones in the 1962 film. Technically this is the very first "Bond Car"!!!

Backstory. Bond rides in the back seat from the airport in Jamaica, driven by the mysterious chauffeur, Mr Jones, who is revealed to be an assassin sent by SPECTRE to kill him.

Details. A 1:18 scale die-cast model of the 1957 Chevy, made in perfect scale with rubber tires and moving wheels. The doors, boot and bonnet open to reveal a meticulously detailed interior. Presented in a full-colour diorama box.

The makers. For over two decades, Motormax has specialised in constructing highly detailed and specialised collectible replicas of officially licensed cars, planes and other vehicles.