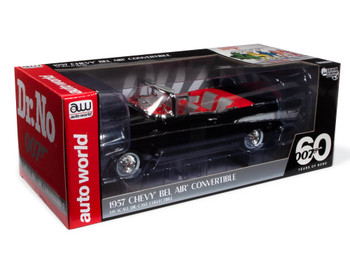 In the 1962 film that launched the James Bond saga, Agent 007 (Sean Connery) battles mysterious Dr. No, a scientific genius bent on destroying the U.S. space program. As the countdown to disaster begins, a sharply-suited Bond must go to Jamaica to confront the megalomaniac villain in his massive headquarters on Crab Key Island.

Mr. Jones, sent by No’s personal army, SPECTRE, offers James Bond a ride at the airport in a black 1957 Bel Air Convertible with red interior. Bond already knows that Jones is an impostor, but willingly gets in the car with the nervous potential assassin. Of course, if Mr. Jones hadn’t been driving such an impressive American car, Bond may have just called him out right there at the airport and been on his way… even 007 can’t turn down a ride in an iconic 1957 Bel Air.

On a lone country road, a fight ensues and Bond manages to overwhelm Jones, who ultimately kills himself by biting down on a cyanide cigarette. James Bond, the sophisticated British government agent, gets behind the wheel of this beautiful American classic, elegantly setting the standards of the Bond formula.