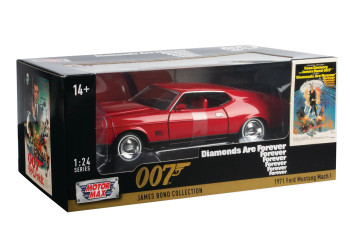 The James Bond Ford Mustang Model Car - Diamonds Are Forever Edition - By Motormax is a die-cast model of the car featured in the film.

Backstory. In the film, Bond uses the Mach 1 to elude the police after escaping from Ernst Stavro Blofeld's secret weapons research lab. He memorably tips Tiffany Case's car onto two wheels to drive through a narrow alley and escape.

Details. A 1:24 Scale 1971 die-cast model made in perfect scale with rubber tires and moving wheels. The doors, boot and bonnet open to reveal a meticulously detailed interior. Presented in a full-color diorama box.

The Makers. For over two decades, Motormax has specialized in constructing highly detailed and specialized collectible replicas of officially licensed cars, planes and other vehicles.