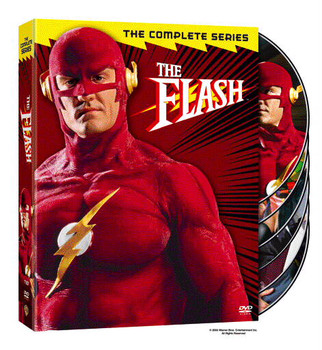 One of the more exciting and atmospheric TV adaptations of a popular comic book series, The Flashbenefited from terrific special effects, but lasted only a single yearon its network in 1990. The series stuck to the Scarlet Speedster''sorigins: police scientist Barry Allen (John Wesley Shipp) is struck bylightning during an experiment, and chemicals splashed on him during theaccident give him the ability to move at incredible speeds (note:hardcore comic fans know that this is the origin for the ''60s version ofthe Flash, not his WWII-era identity). The series partnered him with anattractive fellow scientist (Amanda Pays) who assists Barry in hiscrime-fighting pursuits. Where the show deviated from its sourcematerial was its choice of combatants for the Flash--episodes focused ondecidedly human villains, like corrupt officials ("Watching theDetectives") and mobsters (Michael Nader played ex-cop turned hoodNicholas Pike in two episodes, including the pilot), and didn''t pull inthe comic''s excellent "rogues'' gallery" until the end of the season,when the Trickster (Mark Hamill, who appears in two episodes), CaptainCold (Michael Champion), Mirror Master (David Cassidy!), and a sort-of Reverse-Flash (in the episode "Twin Streaks") made appearances. Sadly,these appearances were too little, too late for the series, whichstruggled with a high per-episode price tag and a fluctuating time slot(as well as frequent breaking coverage of the Gulf War). But for the Flash faithful, the six-disc set compiles its entire 21-episode run, including the 90-minute pilot.