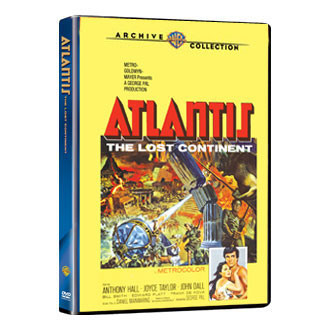 Rejoice, citizens of Atlantis! Princess Antillia, lost upon uncharted seas, has been guided home by intrepid Greek fisherman Demetrios. In a strange act of Atlantean gratitude, Demetrios is cast into slavery. He will endure the macabre House of Hell. Fight for his life before a cheering arena throng in the Ordeal of Fire and Water. And rescue the princess again as they flee the realm's volcanic doom. Welcome to Atlantis, the Lost Continent, where royal guardsmen wear uniforms that could easily be from the wardrobe of Ming the Merciless and where some unfortunate slaves are turned into bovine-headed beasts. Yes, that kind of movie: popcorn-worthy and spearheaded by legendary fantasy film producer George Pal (The War of the Worlds, The Time Machine).