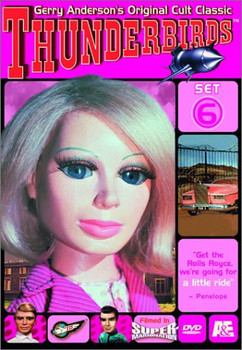 F.A.B.!
From their top-secret Pacific island base, the Tracy family monitors the world for danger and races to the rescue in their extraordinary rescue craft...
Wherever lives are threatened, wherever disaster strikes, Thunderbirds are Go! Race into danger in the year 2067 with the intrepid members of the International Rescue team. Whether streaking to the edge of space in Thunderbird 3 or plunging to the ocean''s bottom in Thunderbird 4, the members of International Rescue are aided in their perilous missions by an incredible array of amazing vehicles.This final DVD set includes the last three episodes plus a selection of special programs and bonus features sure to delight fans of the classic series.
Three complete, uncut and digitally remastered episodes and bonus programs for collectors: