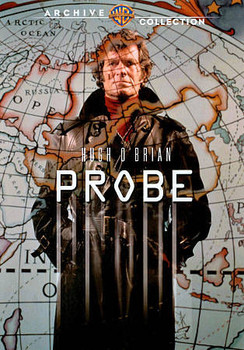 That hipster ring special agent Hugh Lockwood wears? It's a camera, transmitting image and sound of his surroundings. It's also a scanner, detecting tell tale changes in pulse or other biometric readings of himself and the people around him. The ring and more electronic devices some embedded keep Lockwood linked with Probe Control, where experts and banks of computers provide instant mission-critical warnings, intel, even language translations. Hugh O'Brian portrays Lockwood and Burgess Meredith is his mission director in Probe, a telefilm that has Lockwood on a quest to recover priceless diamonds lost since World War II. O'Brian and Meredith reprised their roles in Search, the 1972-73 TV series inspired by the film.