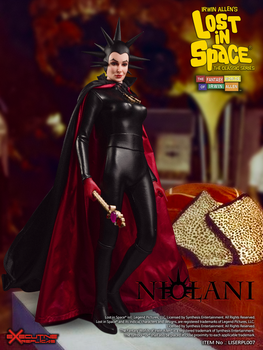 The beautiful Amazonian Alien known as the Noble Niolani, played by Francine
York, first appeared in the second season episode entitled “The Colonists” in
which Don and Dr. Smith are assailed by a high-pitched sound that increases in
intensity until a transmitter and their walkie-talkie are melted. Will, prompted
by the Robot, looks for an alien source of the trouble. At the Jupiter 2, a voice
directs the Robinsons to surrender their arms. Will, meanwhile, has found a cave
with a huge alien transmitter in it. Thinking to destroy the source of the
damaging sonic rays, Will climbs on the machinery, only to set off the ear-
splitting screech. When he and the Robot flee, they encounter the &quot;voice&quot; in the
person of Niolani, the statuesque Amazon warrior leader, preparing the planet
for colonizing by her kind. Placing Will and the Robot under guard, she orders
the men to erect an arch for her warrior colonists to pass through to enable
them to breathe the air of the planet. Niolani takes Maureen to see the girls
listen to a voice that praises women and damns men. Maureen realizes with
horror that they are being brainwashed. When the arch is assembled, Smith
wins approval from Niolani by decorating it with paintings and sculptured
cherubs. Don desperately leaps onto the transmitter hoping to damage it, but is
frozen stiff by Niolani&#39;s sonic weapon. She spares his life only because she needs
him in her work force. Will successfully leads the Robot through a break in the
force field and gets a plastic explosive from the drill site.  With a plastic
explosive cherub fastened to Smith&#39;s artwork, he intends to destroy the arch so
the colonists cannot land and discredit Niolani. Smith almost ruins the plan by
trying to chisel the cherub into better shape. As Niolani&#39;s spaceship approaches,
the arch is blown and the colonists have to veer off. Freeing the Robinsons,

Niolani admits defeat by the miserable males, and reconciles herself to a
domestic future with them.