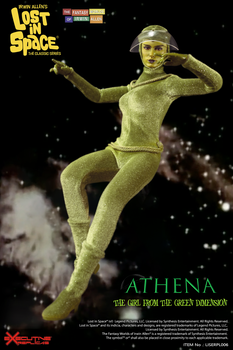 The world’s first introduction to Athena the Lorelei was in the Season two episode Wild Adventure in which the temptress lures Dr. Smith out of the Jupiter Two, forcing the Robinsons to save him and ruin their chances of returning to Earth. Vitina Marcus would reprise her role later that same season in The Girl from the Green Dimension. This time, along with her giant ex-suitor Ursuk, Athena wreaks havoc on the Robinsons. When Ursuk turns Will sparkling Green, Smith entreats Athena to repair the boy, but she explains that Smith will have to fight and defeat Ursuk in order to get him to return Will to his normal color. Ursuk shows Smith a scene in the future which depicts the doctor's burial. The Robot, however, convinces Smith that since he is doomed anyway, he might as well die fighting. Will, meanwhile, has gone to Athena for help. Smith stops in the middle of the duel countdown when he hears the Robinsons nearby, burying something. He sees them disposing of some contaminated radioactive equipment and realizes he is not meant to die after all. Ursuk levels his gun to shoot him until it is whipped from his hands by Athena, who dismisses Smith as unworthy of her attentions. Then, in a puff of green smoke, Athena and Ursuk disappear into the telescope, and Will is returned to his normal color.