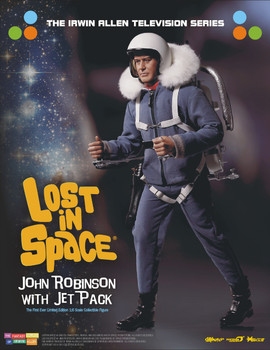 created by the legendary and prolific film and
television producer Irwin Allen (“The Poseidon Adventure”), “Lost in
Space” thrilled audiences of all ages during its first network run on
CBS (1965-1968). For eighty-three
episodes the adventures of the Robinson family, their pilot, Major Don
West, Robot B9, and the cunning castaway named Dr. Zachary Smith
catapulted audiences into a wild universe of robots aliens, space ships, and of course, weird monsters.  A perennial favorite on cable and in
syndication, the series has been translated in dozens of languages and
has been seen in almost every country of the world.

Professor John Robinson was the leader of the Robinson Party and captain of the
Jupiter 2.  His courage in the face of danger and his strong love for
his family made him a model hero.  Although a pacifist by nature, he was a more than capable foe if circumstances demanded quick action with a
space rifle, laser gun, or his fist.
Executive Replicas and Phicen Ltd. are proud to present the John Robinson figure with jet pack.