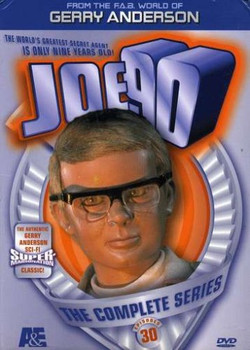 The World''s Greatest Secret Agent is Only Nine Years Old!

In the year 2112, the World Intelligence Network (W.I.N.) welcomes its newest and most unlikely secret agent.

Joe McClaine is just nine years old, but thanks to the Brain Impulse Galvanoscope Record And Transfer (BIG RAT) machine invented by his father, he can be given the skills, knowledge and experience of anyone on earth.

Following on the heels of Thunderbirds and Captain Scarlet, JOE 90 marked yet another triumph for producer Gerry Anderson.

Joe 90 was never broadcast in the United States.

This DVD collection includes all 30 episodes, digitally remastered and restored from 35mm prints and presented in their original production order.