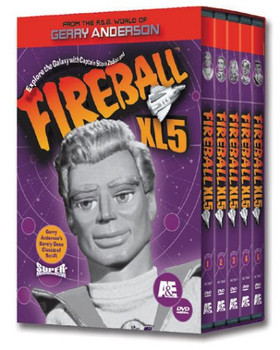 The Fastest Guy Alive!
In the year 2063, the World Space Fleet is extending mankind's reach beyond the solar system. Leading the charge is the incredible spaceship Fireball XL5, commanded by the dashing and daring Colonel Steve Zodiac. With his steadfast crew--the brilliant professor Matt Matic, the lovely space doctor Venus and Robert the Robot--Steve patrols the vast reaches of Sector 25, where strange races inhabit distant planets. In 1962, legendary producer Gerry Anderson (Space: 1999, UFO) turned his attention to space for the first time. The result was FIREBALL XL5, a rarely-seen gem that paved the way for later supermarionation masterpieces like Thunderbirds and Captain Scarlet & the Mysterons. This definitive collection includes all 39 black and white episodes of FIREBALL XL5, digitally restored and presented in their original production order. Return to Galactic Sector 25 as FIREBALL XL5 flies again in this DVD set.

All 39 episodes digitally restored and re-mastered from the original broadcast masters.

I wish I was a space man. The fastest guy alive. I'd fly you round the universe, In Fireball XL-5. Way out in space together, Compass of the sky, My heart would be a fireball, A fireball, Everytime I gazed into your starry eyes. We'd take the path to Jupiter, And maybe very soon. We'd cruise along the Milky Way, And land upon the moon. To our wonderland of stardust, We'll zoom our way to Mars, My heart would be a fireball, A fireball, If you would be my Venus of the stars....