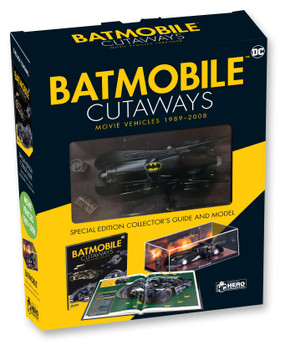 ABOUT BATMOBILE CUTAWAYS: THE MOVIE VEHICLES 1989-2012 PLUS COLLECTIBLE

One of a kind custom cutaway book of vehicles from all the Batman movies! Packaged with die-cast model of the Batmobile from Tim Burton’s Batman!

A behind the scenes look at the design and construction of the iconic vehicles featured in the Batman motion pictures. Featuring Batmobiles from the Tim Burton and Christopher Nolan blockbusters!

This 72-page book comes packaged with a 1/43 scale die-cast metal replica of the Anton Furst designed Batmobile featured in Tim Burton’s 1989 film Batman. Now you can discover what lies inside this and many other machines with extraordinary cutaway art: see under the hood and behind the controls as weapons systems and construction secrets are revealed.