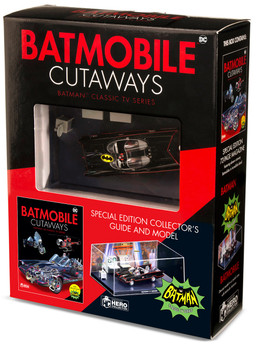 One of a kind custom cutaway book of every vehicle from the original TV series, packaged with a die-cast model of the iconic 1966 Batmobile!

Includes a 1/43 scale die-cast metal replica of the classic 1966 Batmobile in a diorama display of the Batcave - the Caped Crusader's subterranean crime lab!

Learn the secrets of all the vehicles from the classic Batman TV series! This 72 page guidebook features original cutaway artwork approved by Warner Bros. and DC Entertainment. Lavish illustrations and photos highlight every vehicle from the TV series - the Batmobile, Bat-cycle, Bat-copter, Bat-boat, and more. Cutaway artwork reveals the hidden details and gadgets of the Batmobile such as the Mobile Crime Computer, Bat-Ram, Batphone, afterburner, Detect-A-Scope, rocket launchers and "bat turn" parachutes.

More features include detailed blueprints and schematics from the original design and fabrication which was overseen by master custom car fabricator George Barris. Includes dozens of photos and illustrations from DC Entertainment's vast archive of over 75 years of Batman comics, film and television adventures.