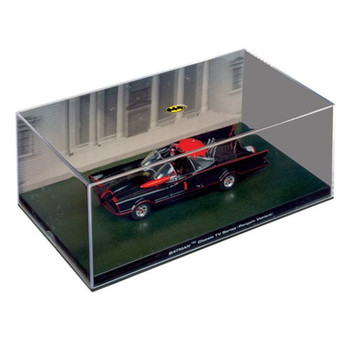 To mark the milestone 50th anniversary of the 1966 Batman TV series, Eaglemoss presents the classic Penguinmobile!

We take you back to the classic 1966 Batman TV show for a fascinating die-cast variant on the Batmobile, as modeled by the Penguin himself!

Jealousy is a terrible thing. This emotion was apparently all too familiar to the foul bird of crime known as the Penguin. Not only did the waddling villain want to feather his nest with illicit loot, he also wanted to supplant Batman as Gotham City’s favorite son. And so, when the opportunity presented itself, the green-eyed Penguin couldn’t resist flying off with the Caped Crusader’s Batmobile – transforming it into a luxurious Birdmobile.

This vehicle is #82 in the series.