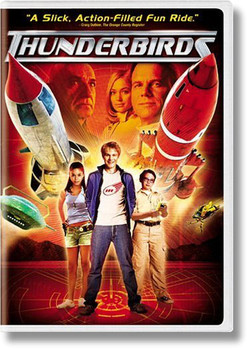 When The Hood finds and invades International Rescue's secret base and traps most of the Tracy family, only young Alan Tracy and his friends can save the day. Having narrowly averted a major disaster on an oil rig, the Thunderbirds have just returned home to their secret base when TB5, their space based station, is critically damaged in a suspected meteor strike. Unbeknown to them, the attack on TB5 is a deliberate ploy by international master criminal the Hood to get them off the island. He takes over the island and forces Brains into submission, using the power of his mind. But the Hood has overlooked one key factor: Alan, Fermat and Tin Tin are still on the island!
Starring:
Bill Paxton, Ben Kingsley, Brady Corbet, Debora Weston, Soren Fulton, Lou Hirsch, Alex Barringer