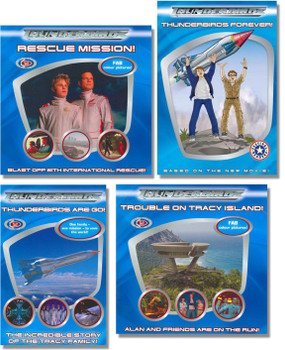 Thunderbirds are GO!
We here at FAB Gear are always interested in spreading the Anderson love to the next generation. Universal''s 2004 Thunderbirds movie is popular with kids around the world, and now we''re offering 3 sets of books based on the film, specifically written for young readers. All of the books are filled with color photos or art from the movie, and are perfect stocking stuffers for your young Thunderbirds fan!
Set 2 includes:

Thunderbirds: Rescue Mission
There''s only one thing Alan Tracy wants to be when he grows up - a Thunderbird just like his father and brothers. But that seems like a long way off...until now! It''s up to Alan and friends to save International Rescue!

Thunderbirds Forever!
Alan Tracy always feels left out. While his older brothers all get to wear the Thunderbirds uniform and rescue people in need, he has to stay behind. His father tries to protect him, but Alan wishes he could go on missions like his brothers. Find out how Alan proves he is ready to be a Thunderbird!

Thunderbirds Are Go
The year: 2010. The problems: One evil criminal psycho, two bad-news sidekicks and a space station under attack. The vehicles: Thunderbirds 5, 4, 3, 2, 1. The story: Alan Tracy is in trouble - BIG TROUBLE. With all his hopes and dreams pinned on earning his Thunderbird wings, Alan faces the ultimate test...

Thunderbirds: Trouble On Tracy Island
With the rest of the Tracy family trapped in space, Alan, Tin Tin and Fermat are in big trouble! Mullion, an evil man who works for bad guy the Hood, is on their tail and they must race through the jungle to save themselves!


Four More Books for Young Readers from Thunderbirds - The Movie!