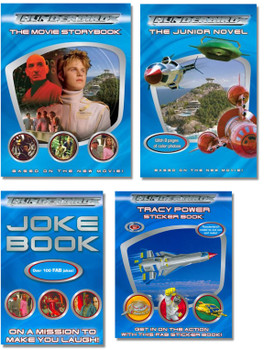 Thunderbirds are GO!
We here at FAB Gear are always interested in spreading the Anderson love to the next generation. Universal''s 2004 Thunderbirds movie is popular with kids around the world, and now we''re offering 3 sets of books based on the film, specifically written for young readers. All of the books are filled with color photos or art from the movie, and are perfect stocking stuffers for your young Thunderbirds fan!
Set 1 includes:

Thunderbirds: The Movie Storybook
For fourteen-year-old Alan Tracy, it''s no fun being stuck at home while your Dad and four older brothers are off on an exciting rescue mission. But master criminal The Hood has plans to liven up Alan''s spring break: He is plotting to steal the family''s fleet of high-tech rescue vehicles known as the Thunderbirds. Now Alan has a mission of his own: to protect his family, their Thunderbirds, and the future of International Rescue. With some help from science-whiz Fermat, clever Tin-Tin, and suave secret agent Lady Penelope Creighton-Ward, Alan is about to learn just what it takes to be a hero. With this photo-packed retelling of the movie story, you can hop in the cockpit and relive the excitement of Thunderbirds!

Thunderbirds: The Junior Novel
Based on the live-action film update from Universal Pictures and Working Title Films of the cult 1960s British television series that used marionettes, this novelization follows the adventures of the Thunderbirds and includes an 8-page full-color photo insert.

Thunderbirds Joke Book
Saving the world is one serious business. But even International Rescue like to kick back and let rip with some FAB jokes. Fasten your seatbelts because they''re on a mission to make you laugh! What do the Thunderbirds call their boxer shorts? Thunderwear!

Thunderbirds Tracy Power Stickerbook
Climb aboard and join the Thunderbirds as they combat the evil Hood. Solve puzzles and get in on the action with totally reusable stickers - just peel and stick them again and again! Plus make your very own Thunderbird 1 model.