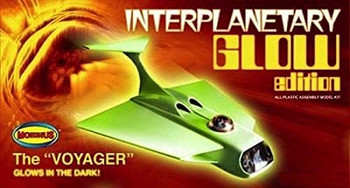 The Interplanetary Voyager - Exclusive Glow in The Dark #1