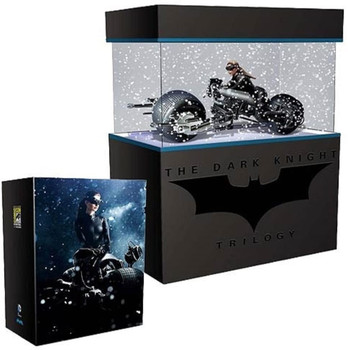 This is the limited edition and very hard to find Dark Knight Bat-Pod with Catwoman Plastic Model made by Moebius.

This 1:18 Preassembled and Pre-Painted Model Kit not only features deluxe packaging but an incredible display, too! Anne Hathaway's Catwoman from the Christopher Nolan movie Dark Knight Rises has been cast in resin and the figural piece leans on the Bat-Pod for a sexy, cool look.
The kit is packaged in a cardboard box that reads, "Comic-Con 2014 Exclusive," and features an awesome illustration of Hathaway's Catwoman wearing her mask, cat ears, and a black pearl necklace. The display itself is a smooth black with the Bat symbol surrounded by the movie title and a clear encasing that recreates Catwoman driving through snow in the Bat-Pod.
A limited edition of 1,000 pieces worldwide. Model measures about 7-inches (18cm) long. Mint in a near Mint sealed display box.