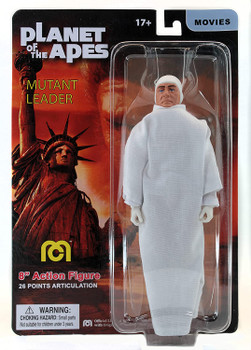 MEGO Planet of the Apes are back

“Earth's final battle is about to begin - Beneath the atomic rubble of what was once the city of New York!”  “Behold the truth that abides in us. Reveal that truth unto that Maker.”

“The bizarre world you met in 'Planet of the Apes' was only the beginning... What lies beneath may be the end!” The telepathic remnants of the Human civilization took refuge below the Earth’s surface thousands of years ago.

The Mutant Leader will defend his people … preserve their way of life from the oncoming Gorilla army at any cost! “As it was in the beginning, is now, and ever shall be. World without end.”

”In one of the countless billions of galaxies in the universe lies a medium-sized star. And one of its satellites, a green and insignificant planet, is now dead.”