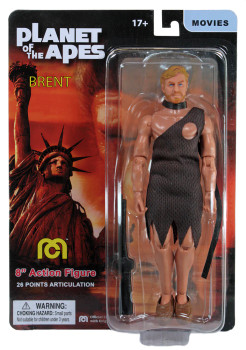 MEGO Planet of the Apes are back

Major John Brent has traveled through a time distortion known as a Hasslein Curve in search of Colonel Taylor. “What the hell would I have to say to a gorilla?”

“Taylor, they've got a bomb. An atomic bomb. It's operational. They intend to use it.” Can Brent rescue Taylor … can he escape the grasp of the Gorilla Army and the Mutant remnants of Human civilization? Will he survive what he ultimately finds beneath the Earth’s surface? “Those bloody fools! They don't know what they've got. They pray to the damn thing!”

Now you can explore what lies Beneath the Planet of the Apes. “If they shoot it off at some of those apes, it could set off a chain reaction in the whole atmosphere.”