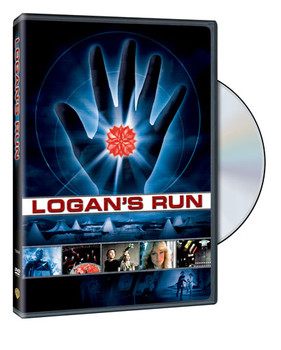 Based on the 1967 science-fiction Book By William F Nolan & George Clayton Johnson.

Set in the year 2274, when ecological disaster has driven civilization to the protection of domed cities, the story revolves around a society that holds a ceremonial death ritual for all citizens who reach the age of 30. In a disease-less city where free sex is encouraged and old age is virtually unknown, Logan (Michael York) is a "sandman," one who enforces this radical method of population control (but he's about to turn 30 and he doesn't want to die). Escaping from the domed city via a network of underground passages, Logan is joined by another "runner" named Jessica (Jenny Agutter), while his former sandman partner (Richard Jordan) is determined to terminate Logan's rebellion. Using a variety of splendid matte paintings and miniatures, Logan's Run earned a special Oscar for visual effects (images of a long-abandoned Washington, D.C., are particularly impressive), and in addition to fine performances by Jordan and Peter Ustinov, the film also features Farrah Fawcett in a supporting role. Jerry Goldsmith's semi-electronic score is still one of the prolific composer's best.