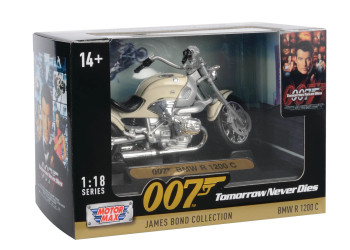 Backstory. In this scene, Bond and Wai Lin ride the cruiser to make a 44-foot leap across two rooftops over the blades of a pursuing helicopter, and later slide under it.

Details. A die-cast model made in perfect scale with rubber tyres and moving wheels. The doors, boot and bonnet open to reveala meticulously detailed interior. Presented in a full-colour diorama box.