Born on 14 February 2043, Gordon Tracy is a twenty-two year-old who revel s in all aquatic sports, from skin-diving to water-skiiing. Named after astronaut Leroy Gordon Cooper, he is highly trained aquanaut, with stints in the Submarine Service and the World Aquanaut Security Patrol under his belt.

During his time with the WASP's, Gordon commanded a deep-sea Bathyscaphe  and spent a year beneat the ocean investating marine farming methods. An expert oceanographer, he is also the designer of a unique underwarer breathing apparatus, which he has modified and improved for International Rescue. Shortly before International Rescue began operating, Gordon was involved in a hydrofoil speedboat crash when his vessel capsized at 400 knots. The craft was completely shattered and Gordon spent four months in a hospital bed. Now, as the pilot of Thunderbird 4, he commands the world's most advanced and versatile one-man submarine. Good-natured and high spirited, he possess a strength and tenacity that make him a respected leader and commander. He is also one of the world's fastest freestyle swimmers and is apast Olympic champion at the butterfly stroke.

Featuring the most faithfully re-produced character likeness, an authentically styled costume and accessories, plus a special illuminating International Rescue display base.

Prodcued in a worldwide numbered limited edition, fans of this classic series can relive the heroic adventures of International Rescue's finest. 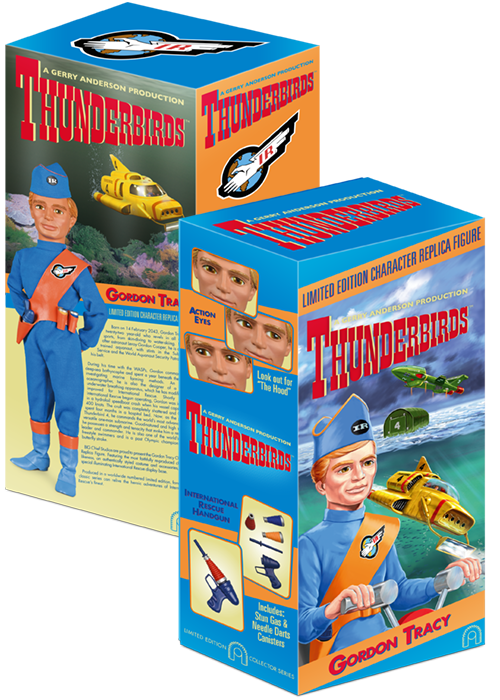