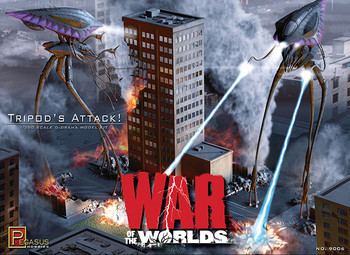 War of The Worlds Tripods Attack! diorama model kit. The tripods' menacing three-leg design and unstoppable attacks on the city streets make these walking war machines one of the most memorable sci-fi designs ever to appear on film.

Kit created from the original 3D computer model files used in the 2005 film!

Modeler's Note: Brand-new factory sealed kit. Suggested for ages 14+. Photos are of professional buildup of kit as an example and color box art. Paint and cement/glue not included. See our other Pegasus Hobbies kits, too.