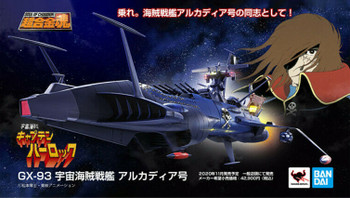 From the pinnacle of romantic space operas, Space Pirate Captain Harlock, comes this 17-inch long Soul of Chogokin rendition of the Captain's inimitably stylish pirate ship. Created in a large scale for incredible detail, this is the definitive portrayal of the spacecraft with all the features, such as lights, movable turrets, a working launch hatch, and an opening battle ram. In addition to distinctive sculpting and styling, the ship plays back seven pieces of music from the series - including Mizuki Ichiro's classic theme song - voice samples recorded by voice actor Makio Inoue, and a selection of sound effects. Relive the drama! Requires 5x "AAA" batteries, included.