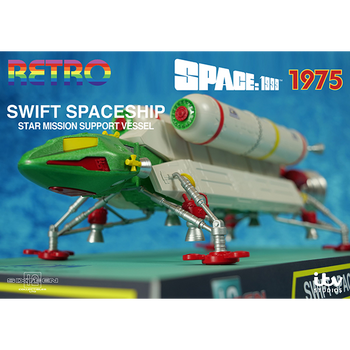 The 1970’s were a great time for memorable Die Cast releases from the shows of Gerry Anderson.

The big hit of 1975, SPACE: 1999, saw many releases of the EAGLE TRANSPORTER and the EAGLE FREIGHTER in multiple colour combinations and packaging styles.

Many theories abound as to the reasons for the toys colour schemes differing wildly from their on-screen counterparts: factory using up old paint stock or manufacturers worried that children would not find white toys “exciting” being two popular favourites.

We may never know the real reason, but what we can be sure of is these toys were fantastic and we loved them!

Imagine what a DIE CAST SWIFT SPACESHIP would have looked like if released in 1975, imagine how excited we would have been……. well imagine no more!

LIMITED EDITION OF 300 ONLY WORLDWIDE - DON’T MISS OUT!