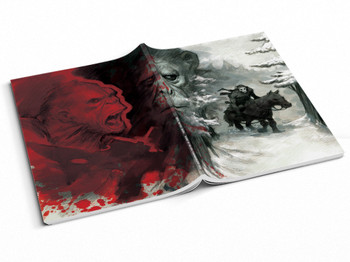 PLANET OF THE APES - Birth.Movies.Death. Issue

The revival of the PLANET OF THE APES franchise well over three decades after the original ended (and ten years after a reboot fizzled) was nothing if not a risky endeavor. Audiences were skeptical, to the say the least — until they saw Rupert Wyatt’s 2011 film RISE OF THE PLANET OF THE APES, a technical achievement surpassed only by its heart.

That film was followed up by an even more breathtaking emotional and visual triumph, Matt Reeves’ 2014 sequel DAWN OF THE PLANET OF THE APES. Audiences fell in love with Andy Serkis’ Caesar, and with the rich, morally complex world he inhabited.

Next month we’re reaching the final chapter in PLANET OF THE APES’ latest trilogy, with Reeves returning to direct the insanely anticipated WAR FOR THE PLANET OF THE APES. In celebration of this franchise that has meant so much to so many for almost fifty years, we are dedicating an issue of BIRTH.MOVIES.DEATH. magazine to the whole dang planet.