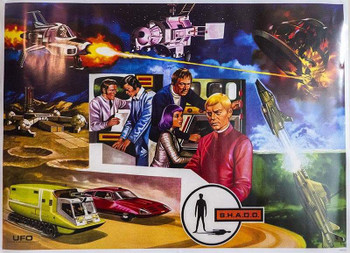 Previously thought to be sold out, this double-sided poster features a Ron Embleton poster design, with a mosaic of 64 UFO bubblegum cards, designed by Gerry Embleton, on the reverse.

Ron Embleton is perhaps best known in the Anderson universe for his dramatic paintings that were employed as the end title panels on Captain Scarlet and the Mysterons, and along with his brother Gerry was a regular contributor to the TV Century 21 comic. The Embletons also worked together on several series of bubblegum cards for Anglo Confectionary between 1967 and 1970. Sets of Captain Scarlet and Joe 90 cards were followed by a final release of UFO, in the form of a 64-card set, featuring drawings by Gerry on the front panels (alongside photographs from the series), with the reverse sides assembling into a large montage image painted by Ron. Buyers could send away gum wrappers in exchange for a poster of the jigsaw, and this complete image now features on our own exclusive, limited edition poster.

These original posters are now extremely rare – if, indeed any still exist – so we've done ours the hard way, assembling the picture from the individual cards and restoring the complete image as a perfect facsimile of the original. As a bonus, on the reverse, we’ve included a grid of the 64 gum cards, assembled as they would have been on the original printer’s artwork, with each card corresponding to a small section of the jigsaw on the opposite side. The poster comes rolled in a tube and is presented at its original printed size of 600x440mm.

Ideal for display in your home or office to show that you are a true UFO and Gerry Anderson fan!