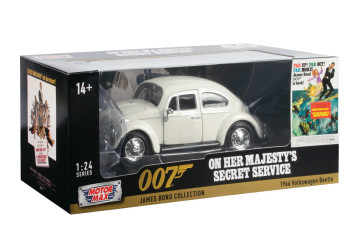 The James Bond VW Beetle Model Car - On Her Majesty's Secret Service edition - By Motormax is a die-cast model of the car featured in the 1969 film.

Backstory. This white 1966 VW Beetle is emblematic of 1960’s elegance and is driven in On Her Majesty's Secret Service by the 00 agent shadowing Bond in the Alps.

Details. A 1:24 scale die-cast model of the 1966 Beetle, made in perfect scale with rubber tires and moving wheels. The doors, boot and bonnet open to reveal a meticulously detailed interior. Presented in a full-colour diorama box.

The Makers. For over two decades, Motormax has specialized in constructing highly detailed and specialized collectible replicas of officially licensed cars, planes and other vehicles.