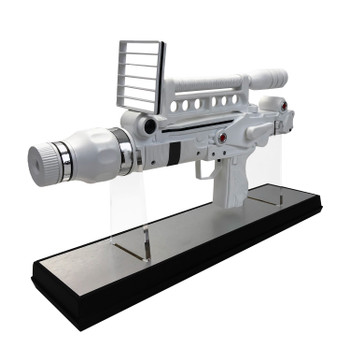 ‘Mr. Bond, you persist in defying my efforts to provide an amusing death for you.’
Hugo DraxTHE ORIGINAL PROPSMOONRAKER, released in 1979 at the height of a global science-fiction craze, details Bonds efforts to thwart the genocidal plans of Hugo Drax. On the surface a hugely successful global business titan, Drax is, in truth, a madman bent on global domination.The original props were polyurethane and rubber with no moving parts. They were specially constructed for the film by the EON Productions prop department, and a large quantity of different props were produced. The main body was constructed around a casting taken from a toy gun. Various real-world parts, including plumbing supplies, were added to complete the fantasy look. The laser effects seen on screen were added later during post-production using a labor-intensive animation technique known as ‘rotoscoping. While cutting edge in its day, the process has been replaced by modern digital effects today. A slightly more detailed ‘hero’ prop was briefly seen being used by an MI6 operative disguised as a monk. A large number of stunt props were used during the climactic final battle sequence, both as handheld weapons and as mounted onto the US Marines’ spacewalk apparatus.

THE REPLICAThe Factory Entertainment Moonraker Laser prop replica was created after careful study of the original props in the EON Productions archives, as well as reference photographs and original production drawings.The original props were made quickly, of lightweight materials, to suit the needs of film production. The replica is cast from a heavyweight polyresin and features metal fittings. Although visually identical to the original, the replica has more heft and strength than the original props.Physical triggers are not present on the original props; they were deliberately omitted for practical reasons, to allow the actors to hold the props and fit their fingers into the area where a trigger would normally be while wearing thick astronaut gloves.The replica features an ultra-bright blue LED light effect, activated by a concealed button, as a homage to the ground-breaking rotoscoped visual effects and to enhance the 70’s laser-weapon aesthetic.Inspired by the Moonraker laser’s later appearances in 007 video games, scope detail and a movable ‘selector-lever’ have also been incorporated into the replica.Each replica includes a certificate of authenticity booklet, a display stand and an individually numbered metal plaque. The edition size is 750 pieces.Requires 2 x AAA (LR3) Batteries. Batteries included.