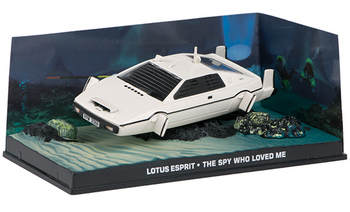 The Lotus Esprit was featured in The Spy Who Loved Me and was fondly referred to as "Wet Nellie" in tribute to Bond's autogyro "Little Nellie". As well as being amphibious, the highly armed car had cannons that sprayed cement on to pursuing vehicles. It also has wheel arches that turn into fins, a small periscope on the roof enabling Bond to navigate at speed underwater and its other weaponry includes a missile launcher, mines and torpedoes. Its unique feature of converting into a submarine definitely makes this model stand out from the rest.