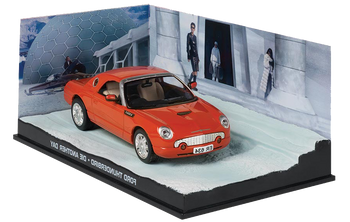 The Ford Thunderbird was driven by Bond girl, Jinx, in the film Die Another Day. It had a coral hard-top instead of a white top, matching Jinx's bikini she wore in the film. This hot ride was released on the 40th Anniversary of Bond films, so relive the celebration with this special model.