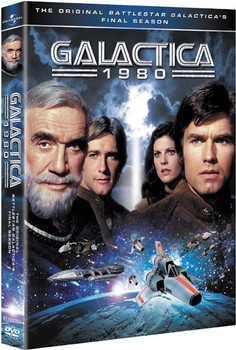 Galactica 1980 lands on DVD for the first time ever! With all ten thrilling episodes on two discs, see what happens when the original Battlestar Galactica crew finally makes the long-anticipated descent to Earth. With time running out and the Cylons closing in on their trail, Commander Adama and the Galactica must work harder than ever before to help Earth create the technology necessary for battle. Along for the action-packed fight are such stellar guest stars as Dirk Benedict, Brion James, Dennis Haysbert and more! It's an epic adventure unlike any other, and an absolute must-have for any Battlestar Galactica collection!