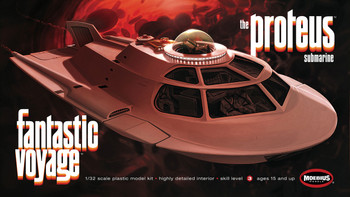 THE PROTEUS SUBMARINE FROM FANTASTIC VOYAGE.

At the height of the Cold War, the C.M.D.F. (Combined Miniaturized Deterrent Forces) are enlisted to save the life of a Soviet scientist who has defected to the United States.  An assassination attempt has left the scientist with an unreachable blood clot in his brain; only the crew of the experimental submarine U-91035, aka the Proteus can perform the delicate operation - by shrinking down to an impossible small size and traveling through the scientist's body!