Travel through time and space with Doctor Who! Reminiscent of the best-selling action figures of the 1970s and 1980s, Bif Bang Pow!'s amazing Doctor Who figures stand 8-inches tall and feature episode-specific fabric clothing, in addition to multiple points of articulation. Based on the incredibly popular television series, they embody that distinctive look and feel of the longest-running sci-fi TV series in the world. Ages 14 and up.

The last of his vicious and warlike Jagaroth race, Scaroth does make one dandy action figure! Based on the Doctor Who serial "City of Death," he even brings a gun accessory to the party.

You probably want a renegade Time Lord to add to your shelf. If so, this marvelous Morbius Action Figure is just what the Doctor ordered. Get yours now, before some fanatical scientist runs off with him and his brain! 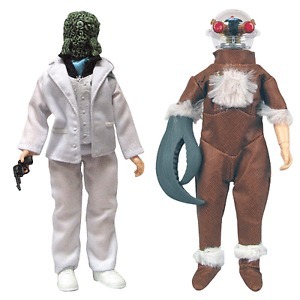