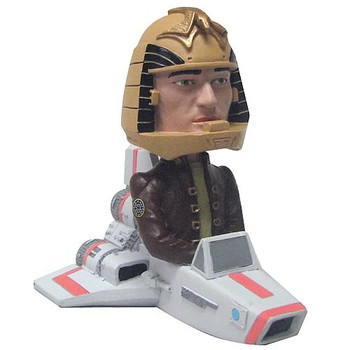 Hot on the trail! Bif Bang Pow! presents an exciting array of resin bobble heads inspired by the ever-popular sci-fi TV series Battlestar Galactica. In 7-inch scale, each bobbler spotlights a key character from the show, be they gallant hero or malevolent villain. The intrepid Captain Apollo, played by actor Richard Hatch, is featured here in his Colonial Viper, hot on the trail of those nasty Cylons.

Order Captain Apollo now and collect the entire Galactica crew... and their adversaries!