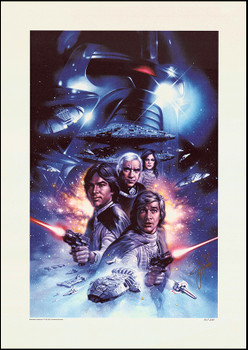 Tsuneo Sanda was born in Osaka and currently resides in Japan. He spent his early years running his own advertising firm while creating original artwork in his spare time. After winning the top prize in a Japanese science fiction art competition he came to the attention of New York-based OMNI magazine, and in 1989 the magazine began featuring his artwork as cover art on a number of its issues.

In the years that followed, Sanda began producing more science-fiction and fantasy themed art with a special focus on Star Trek and Star Wars characters. Some of his works can be seen in art posters produced for Paramount Pictures’ Star Trek; special posters commissioned for the Star Trek 30th

Anniversary; cover art for the Star Trek fan mag, Communicator; and poster art for the opening of Paramount Parks/Experience. Since 1996, he has been producing art posters and book covers for Lucasfilm’s Star Wars. Lucasfilm has been acquiring Sanda’s artwork and currently holds the majority of all his original Star Wars-themed paintings. Since 2008 Tsuneo Sanda has dedicated himself fulltime to artwork painting. In 2010 he began producing Disney artwork through ACME. Sanda's artworks were placed in published "Star Wars Illustration" of art book by Lucasfilm.