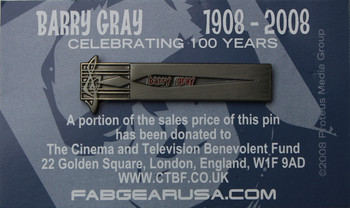 Strike Up the Band!

2008 was the 100th anniversary of Barry''s birth, and to commemorate the centenary, FABGEARUSA has created an exclusive lapel pin.

Based on Barry Gray's own personal letterhead design, the pin measures 2 inches long and is created in brushed pewter with a cloisonne inlay.

THIS IS A FABGEARUSA EXCLUSIVE!