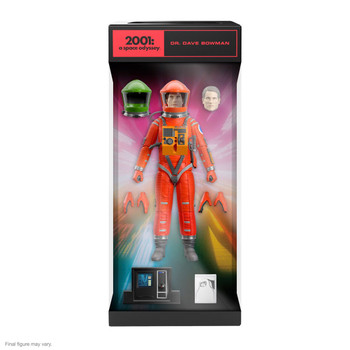 Only a daring manual air lock re-entry is able to save Astronaut Dave Bowman, allowing him to disconnect the murderous HAL 9000 computer, and complete his mission to the giant Monolith near Jupiter. This made-to-order, fully articulated 2001: A Space Odyssey ULTIMATES! 7-inch figure of Astronaut Dave features highly detailed paint and sculpting, depicting him in his red space-suit, and comes with interchangeable heads and hands as well as a variety of accessories. Astronaut Dave is mesmerized and awestruck when gazing into the heart of the giant Monolith, and you can expect the same reaction of overwhelming wonder when someone sees your new collection of 2001: A Space Odyssey figures for the first time! Discoveries that change the course of human existence are rare and fleeting, and so is the chance to order your 2001: A Space Odyssey ULTIMATES! figures, so don't miss out! Accessories inclued: