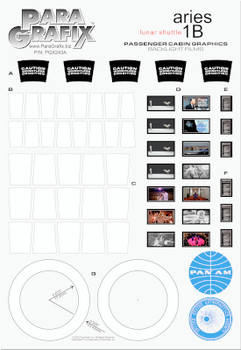 Make the interior of Moebius Models’ new Aries 1B pop with decals and lighting films*.

Films are included for these areas:

The decals include the same television screens and zero gravity toilet instructions as the lighting films for those who don’t wish to do the modifications necessary to light them. In addition, decals are included for: