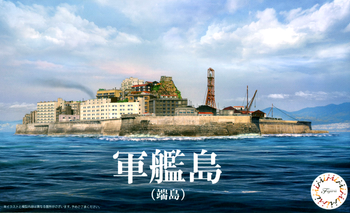 A new battleship appears in Fujimi's 1/3000 scale line of warship dioramas! Well, perhaps not technically a battleship, but Gunkanjima in Japanese translates to Battleship Island! Now abandoned, Gunkanjima was a coal mine in operation from 1887 until 1974.  The island was featured as a location in the James Bond film "Skyfall."

According to the manufacturer:

The image is a prototype. Actual product may differ.