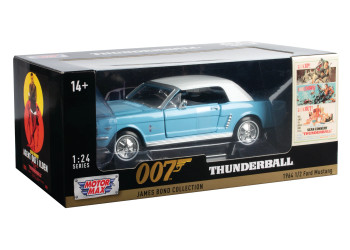 The James Bond Ford Mustang Model Car - Thunderball Edition by Motormax is a die-cast model from the 1965 film, expertly crafted to a 1:24 scale.

The model is based on Fiona Volpe’s Caribbean Turquoise Mustang, who drives Bond at breakneck speed to their lodgings in Nassau in the film.

Details. A 1:24 scale die-cast model of the 1964 car made in perfect scale with rubber tires and moving wheels. The doors, boot and bonnet open to reveal a meticulously detailed interior. Presented in a full-colour diorama box.