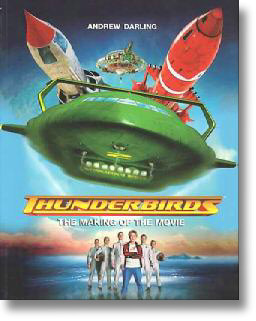 Thunderbirds - The Making of the Movie

Time to Thunderize!
Thunderbirds Universal Studio's biggest action film of 2004 is rocketing to the big screen this August. A live action science fiction thriller starring Ben Kingsley and Bill Paxton, it features some of the most cutting edge special effects ever seen on film. Thunderbirds: The Making of the Movie is your guide to the exciting and dangerous world of 2010. As well as in depth interviews with the cast and the director Jonathan Frakes, the book offers a close up look at the amazing special effects, the scripts, the set, the casting, and the shooting. It also uncovers the secrets of International Rescue and its story so far: its aims, its agents, its machines, its enemies. Illustrated throughout with color photos and stills, this is the essential behindÐ theÐscenes guide to one of the film events of the year.
By Andrew Darling
128 Pages
ISBN#: 1903111773
Published by Reynolds & Hearn
Imported from England

by Andrew Darling. The official book of the making of the film!