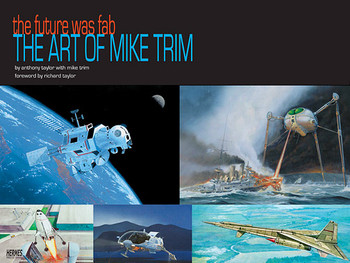 The Future Was FAB: The Art of Mike Trim Ltd. Hardcover

The Future Was FAB

The Art of Mike Trim Book

"A book of Mike Trim’s design work is a thing to be treasured."
-- Richard Taylor
5 time Academy Award™ winning Special Effects director for The Lord of The Rings, King Kong, Master & Commander: The Far Side of the World, and director of Weta Workshop

In 1964, young Mike Trim answered a newspaper advertisement seeking modelmakers for a film production crew and began an odyssey that would last for more than 40 years. Beginning in the final days of Stingray, Trim would work as a modelmaker and designer for Gerry and Sylvia Anderson's television series Thunderbirds, Captain Scarlet, Joe 90, The Secret Service, and UFO, as well as their feature films Thunderbirds are Go, Thunderbird 6, and Journey to the Far Side of the Sun (a.k.a. Doppleganger).
Starting out in the model shop, Mike soon became Special Effects director Derek Meddings' assistant in designing the fabulous futuristic vehicles, buildings, and look of the Andersons' imaginitive series. Eventually, he would take on the bulk of design work for the series as Meddings became more involved in feature films.
Contributing a single (unused) vehicle design and model to Space: 1999, Trim then moved into freelance illustration, creating an iconic cover painting for one of the best selling albums of all time; Jeff Wayne's Musical Version of The War Of The Worlds, in 1978.
The Future was FAB: The Art of Mike Trim is an in-depth look at the career of this creative and talented man. Featuring hundreds of full color and black & white drawings, paintings, marker comps, and photos from his entire career, the book offers a detailed view of how to foretell the future at the end of a paintbrush. Along the way, Mike relates humorous and interesting stories of his years working with Derek Meddings and the Century 21 Films crew, as well as his experiences as a freelance artist and how the instantly recognizable cover art for The War of The Worlds was designed. With chapters covering his techniques and early influences, unproduced and upcoming projects and more, The Future was FAB: The Art of Mike Trim is a fitting tribute to an artist whose work has permeated the pop culture landscape for the last 40 years.
By Anthony Taylor with Mike Trim
Forewords by Richard Taylor and David Tremont of Weta Workshop
Published by Hermes Press
128 pages, Trade Paperback - 8.5"x 11" 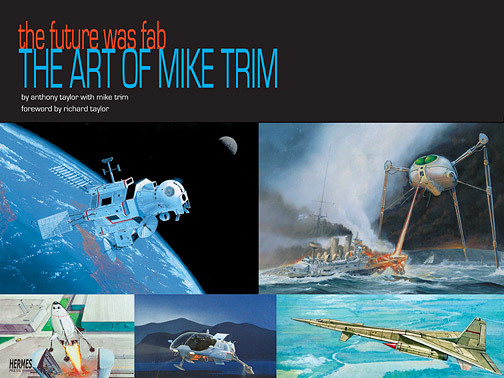 Short promo for The Future was FAB: The Art of Mike Trim, a book of illustration, design, and model building from an artist who worked on the television series THUNDERBIRDS, Captain Scarlet, UFO, Joe 90, and created the cover art for Jeff Wayne's Musical Version of The War Of The Worlds.