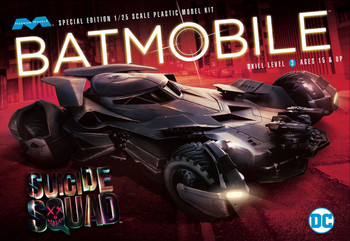 This large Batman v Superman Batmobile 1:25 Scale Model Kit is taken direct from the 3D files for the film.

This is the largest Batmobile yet, and the detail is here! Experienced builders only,
requires paint and glue for final assembly.
Made of plastic.
1:25 Scale
This is more of a package variation, kit will build either version. Only true difference is the suicide squad version doesn't use the guns, it's capped off. This packaging will only be around for 1 run, after it sells out, it will revert back to the original packaging.