Released as a prize for claw machines in Japan, the COSMO ZERO is from the classic anime SPACE BATTLESHIP YAMATO, released here in the U.S. as STARBLAZERS.

Set in the year 2199, an alien race known as the "Gamilas" ("Gamilons" in the English dub) are raining radioactive bombs on Earth, rendering the planet's surface dead and uninhabitable.

Humanity lives in refuges built deep underground, but the radioactivity is slowly infiltrating the underground cities too.

Earth's space fleet is hopelessly outclassed by the Gamilas and all seems lost until a mysterious space probe is retrieved on Mars.

Blueprints for a faster-than-light engine are discovered, and a message from Queen Starsha of the planet Iscandar in the Large Magellanic Cloud says that she has a device, the Cosmo-Cleaner D (Cosmo DNA), which can cleanse Earth of its radiation damage.

Taito's model is a real beauty - highly detailed and comes complete with display stand in a colorful windowbox package. 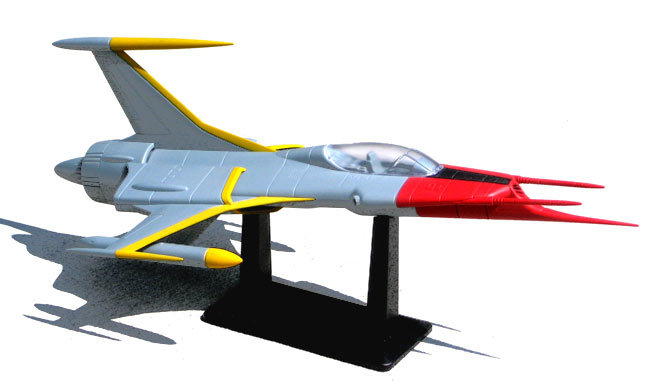