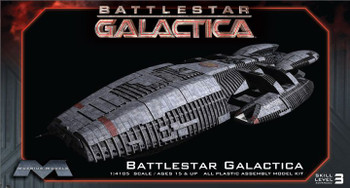 Galactica was one of the first twelve battlestars to be constructed by the Colonials, each representing one of the twelve colonies; Galactica represented Caprica. As such, she is some 50 years old.  Galactica (BS 75) is a veteran battlestar and the last of her kind still in service with the Colonial Fleet at the time of the destruction of the Twelve Colonies. Built during the early days of the Cylon War, she becomes one of only two known battlestars (the other being Pegasus) to survive the renewed Cylon attack on the Twelve Colonies. By the time of this attack, she was part of the 75th Battlestar Group (BSG-75).