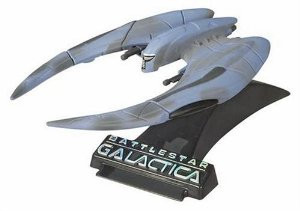 This particular item is the 3 inch version.

This item is brand new, mint condition and sealed.

During the initial surprise attack on the 12 colonies of Kobol, Cylon Raiders didn't need to be clever; most of their targets were rendered helpless by Cylon viruses. Since then humanity has learned more about the Cylons, and hundreds of Raiders have fallen before the vastly outnumbered Colonial Vipers. Scar is one of the Raiders that have survived. Fast, intelligent and with an ever-growing database of human tactics, it is a master of luring Viper pilots into tactically submissive situations and blowing them out of space. As its kill count rises, and it continues to avoid destruction, the Galactica's fighter squadron faces more and more empty seats in its ready room.

Collectible Colonial Raptor vehicle has an opening cockpit and comes with a display stand!